Why engagement with youths must be transparent, by Osinbajo 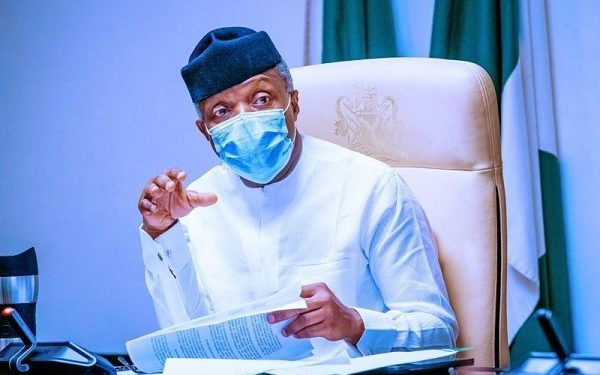 Vice-President Yemi Osinbajo has said building a progressive Nigeria will depend a lot on transparently engaging with the youths.

This, according to him, was why the implementation of the Muhammadu Buhari administration’s Social Investment Programmes (SIPs) were not done on the basis of sharing slots between public officials or political chieftains, but in a manner whereby Nigerians who knew no one could benefit.

The Vice-President spoke on Tuesday when he hosted the Executive Committee of the Young Parliamentarians’ Forum, led by its Chairman, Karu Simon Elisha.

Osinbajo said: “The first problem was that everybody wanted a slot. I resisted it. Why? If I do that, we will destroy the programmes because majority of Nigerians don’t know people who will take the slots.”

According to a statement by the Senior Special Assistant to the President on Media and Publicity, Office of the Vice-President, Mr. Laolu Akande, VP Osinbajo added:  “It was not that one was being purist. But if young people can’t get the benefit except they know someone, then we have failed the young people.”

Recalling how President Buhari responded to the implementation of the SIPs, which was done openly by giving everyone an equal opportunity to benefit, the Vice-President said: “One day, the President called me that he was listening to BBC Hausa Service and he heard two young men – beneficiaries of N-Power – saying they didn’t know anybody but were being paid the N30,000 monthly stipends. The President said that is what shows we are making a difference.

“And everywhere we went during the 2019 campaigns, we had these young people organising themselves, coming out supporting us.

“If people know they count, then they can trust us and they won’t destroy because they have a stake. Otherwise, people will never trust us.”